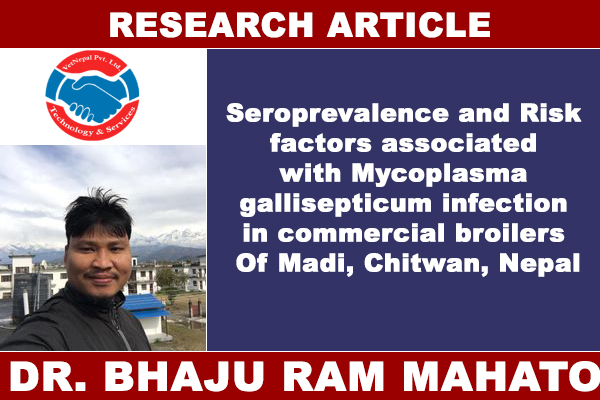 INTRODUCTION: Mycoplasma gallisepticum (MG) infections are commonly known as chronic respiratory disease (CRD) in chickens. This study was conducted to determine the status and risk factors of MG infection in commercial broilers of Madi, Chitwan, Nepal.

MATERIALS AND METHODS: This study was conducted from August 2012 to January 2013. Questionnaire survey was conducted to take demograghic data like age, sex, location and flock size for analysis of these factors as risk factors. Altogether 242 serum samples were collected for laboratory analysis. All samples were screened by serum plate agglutination (SPA) test and 10% of SPA positive samples were confirmed by dot- ELISA (ImmunocombR) for determination of MG infection.

RESULTS: Overall seroprevalence of M. gallisepticum infection was found as 73.14%.  Age and sex of birds were significantly associated with MG infection (p<0.05) while Flock size was not. Specificity of SPA test was 85% in relation to dot-ELISA and dot ELISA results showed most of infection were mild in nature.

CONCLUSIONS: M. gallisepticum infection is widespread in village Farms which is an important disease problem and the poultry farms are at greater risk of outbreak of diseases. The results of the serological tests in this study showed that a certain level of false positive results can be expected in virtually any serological test show that it is not advisable to rely completely on one test only. In conclusion regular blood testing and depopulation of infected flocks have enormously reduced the prevalence of M. gallisepticum in other countries, but this approach is seldom practicable in Nepal.

Mycoplasmas are very small prokaryotes devoid of cell walls, bounded by a plasma membrane only.MG infection is a chronic respiratory disease (CRD) in avian species (Ley, 2003) transmitted both horizontally and vertically and it remains in the flock continuously as a subclinical form (Bencina et. al., 1987). Clinical symptoms of MG infections in these avian species include rales, coughing, nasal discharge, sinusitis and severe air sac lesions, and consequences of MG include mortality, carcass condemnation, and reduced egg production, hatchability, food efficiency, and weight gain. Due to the substantial performance and production losses, MG has been described as the most economically important of the 4 pathogenic Mycoplasma species affecting  poultry  (Ley and Yoder, 1997).

MG can be diagnosed based on morphological and cultural characteristics, biochemical and serological properties (Edward, 1960). MG serology methods, such as serum plate agglutination (SPA), enzyme linked immunosorbent assay (ELISA) and haemagglutination inhibition (HI) tests are widely used, faster and easier as compared to culturing method (Feberwee, 2005); however, each method is limited by sensitivity and specificity. SPA is used as the screening test because it is rapid and inexpensive, highly sensitive but low specific while Dot-ELISA is less in sensitive and highly specific.

Questionnaire survey: it was conducted to take demographic data like age, breed, sex, flock size and location of farm for analysis of these factors as risk factors.

A total of 242 blood samples were collected from fifty randomly selected farms. Two ml of blood was collected aseptically from wing vein using 3 ml sterile disposable syringe and needle. The syringe with blood was kept undisturbed at room temperature in a standing position for 5 hours to prevent haemolysis of blood. After clotting of blood inside the syringe, serum fluid portion of blood was harvested by decanting. The harvested sera were transferred to serum vial and were kept in a cool box before shipping to the deep freeze storage. Then serum samples were shipped to National Avian Laboratory, Bharatpur, Chitwan by keeping serum vial in thermo cool box along with frozen ice packs for the detection of MG infection.

The SPA test was conducted according to the instructions of OIE Manual (2002). For this test 0.02 ml of antigen and 0.02 ml of chicken serum were placed side by side with micro pipettes on a glass plate. Then antigen and serum sample were mixed thoroughly by stirring with a small tooth pick. Positive reaction was characterized by the formation of definite clumps within 2 minutes after mixing the test serum with antigen. The clumps usually started appearing and became concentrated at the periphery of the mixture. Negative reaction was judged by the absence of agglutination reaction. Care was taken so that the natural granulation of the antigen showed not to be taken as a positive reaction.

Solid phase immuno assay was conducted for 10% of SPA positive samples of MG. Using the tweezers, slit of protective aluminum cover of wells in row A were opened. Sample was dispensed into each well. Using a pipette, sample was mixed by depressing carefully the plunger a number of times. The next 2 consecutive wells were opened for control serum. Take 5μl Positive Control serum (C+) was taken and inserted into well A next to the last sample. Mix the serum was mixed into the well. Same was did with the Negative Control serum (C-) in the following well. One Comb from its protective wrapping was removed and inserted it (printed side facing you) into Row A. Then incubated for 10 minutes. To improve mixing, Comb was gently moved up and down at the start of each incubation (each row). This motion was repeated at least twice in all of the remaining rows. In each further step, open and use only the corresponding wells in the developing plate were opened and used. The cover of wells in Row B was pierced with the tweezers. Gently shake off excess liquid was gently shaked off from the Comb onto a tissue (follow the same procedure for remaining rows at the end of each step). Insert Comb was inserted into wells of Row B and incubated for 2 minutes, shaked off and transferred the Comb to Row C and incubated for 10 minutes. The Comb was placed in Row D for 2 minutes, Row E for 2 minutes, and Row F for 10 minutes, allowing the color reaction process to develop. After the Comb has completed the cycle for Row F, it was transferred back to Row E. Incubated in Row E for 2 minutes color fixation.

Reading was done to detrmine antibody level and species of mycoplasma by comparing the colour tone of dot of developed comb and colour tone of calibrated colored CombScale provided in the kit.

By this comparison severity of infection or antibody titer were graded as:

Data analysis was done by SPSS version16.0 and different risk factors were analysed by chi-square test. Graphical representation and tabulation was done in MS excel- 2007.

RESULTS AND DISCUSSION OF SPA TEST

A total of 242 sera samples were collected from 50 commercial broiler farms and were subjected to SPA test. Out of total, 242 samples, 177 (73.14%) were found positive for MG infection. This is higer than the result showed by Barua et., al. (2006). He found 49.5% seropositivity by SPA test in Iran. Prevalence is very high in farm running under bad management and poor biosecurity (Chauhan and Roy, 2008. This high prevalence in study site (Madi) is supposed to be also due to bad management, poor biosecurity and poor ventilation.

Prevalence of M. gallisepticum infection in relation to flock size

This finding was in close agreement with previous results reported by Hossain et al. (2010) and Seifi et al. (2012).

Prevalence of M. gallisepticum infection in relation to sex

The Prevalence of MG infection was significantly higher (79.34%) in female than in male (66.94%) indicating that female birds were more susceptible than male birds, but the cause was not established. The statistical analysis further revealed that there was significant difference in the prevalence of MG infection between the sex of birds (p>0.05). this finding is in close agreement with finding reported by Seif et. al. (2012) and Khoskhoo  et. al. (2011)

Prevalence of M. gallisepticum infection in relation to location

15% SPA positive sample showed negative in dot-ELISA (fasle positive on SPA) which is due to cross reactivity of MG antigen with MS antibody. Therefore reliability (specificity) of SPA test for MG infection was 85% in relation to dot-ELISA. Dot-ELISA results showed most of infection (45%) were mild type, 20% as strong type and 20%  as weak type.

Mycoplasma gallisepticum infection is widespread in village Farms which is an important disease problem and the poultry farms are at greater risk of outbreak of diseases. The results of the serological tests in this study showed that a certain level of false positive results can be expected in virtually any serological test. Although the level of false positive results varied between the two serological tests, these results show that it is not advisable to rely completely on one test only. In conclusion regular blood testing and depopulation of infected flocks have enormously reduced the prevalence of M. gallisepticum in other countries, but this approach is seldom practicable in Nepal.

Faisal, Z., A. Ideris, M. Hair-Bejo, A. R. Omar and T. Ching-Giap. 2011. The Prevalence of Mycoplasma gallisepticum Infection in Chickens from Peninsular Malaysia. Journal of Animal and Veterinary Advances, 10: 1867–1874.

Hossain K.M. 2010. Seroprevalence of Salmonella and Mycoplasma gallisepticum Infection in Chickens in Rajshahi and Surrounding Districts of Bangladesh. International Journal of Biology, 2: 43-47.

Khoshkhoo P.H., G. Akbariazad and M. Roohi. 2011. Seroprevalence of Mycoplasma gallisepticum and Mycoplasma synoviae infection in the commercial layer flocks of the Centernorth of Iran. African Journal of Microbiology Research,  5(18) : 2834-2837. 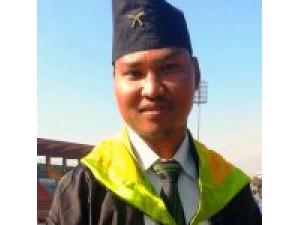